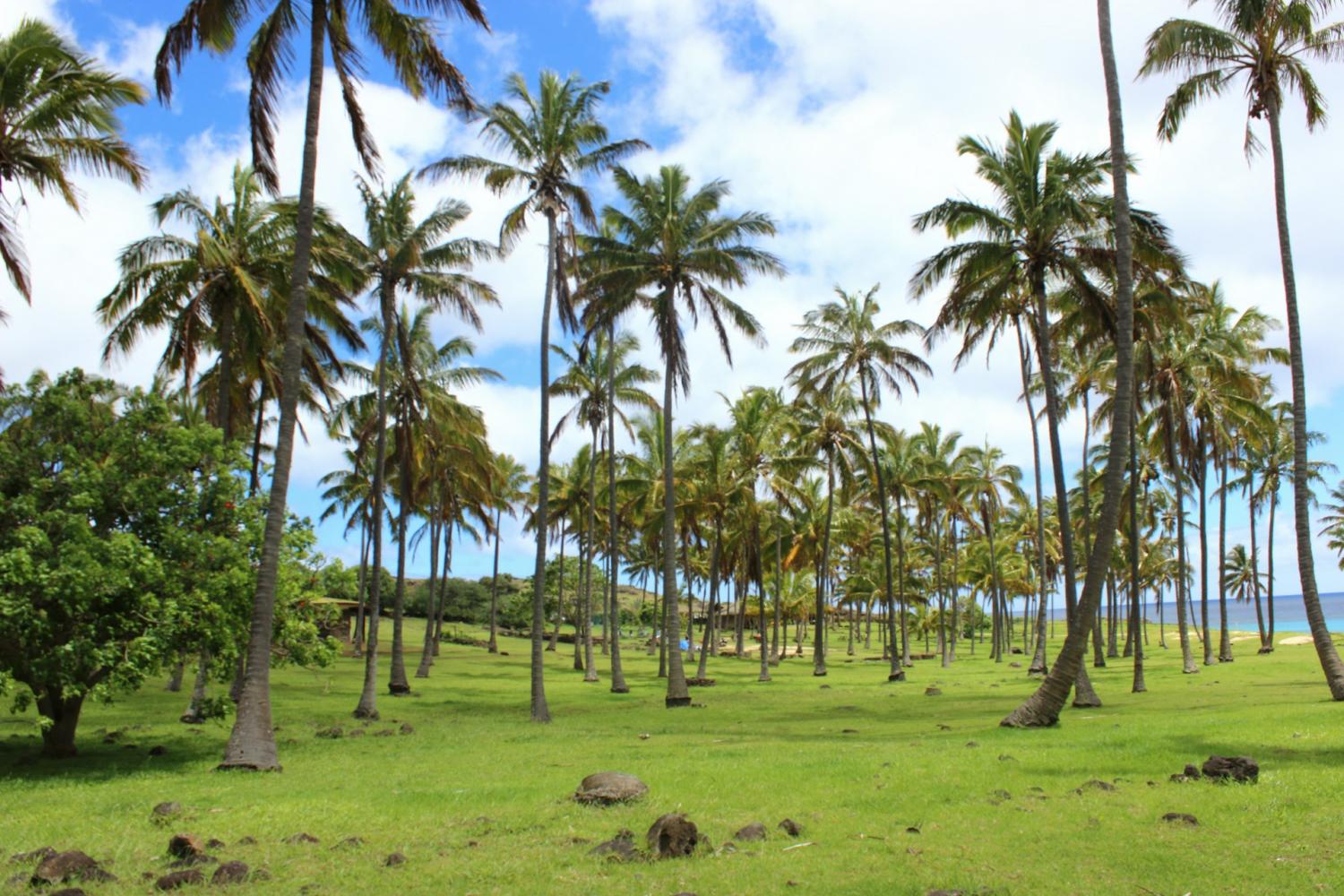 On your sightseeing adventure, you'll come across moai, stone giants that on average stand 13 feet (4 meters) tall and weigh 14 tons (13 metric tons). Said to represent ancestral spirits or preeminent tribal figures, some moai are placed upon ahu, or ceremonial sites.

After hotel pickup, your guide takes you to Ahu Akahanga, located on the southeastern coast of the island. Unlike most ahu, Akahanga has not been restored, allowing you to stumble upon the area as European explorers first did. The platform, about 59 feet (18 meters) long, originally contained about a dozen moai and is believed to be the burial site of Polynesian king Hoto Matu’a.

Walk about the grounds sprawled with overturned moai that have pukao, decorative head topknots, with tribal fighting providing one explanation for this curious scene.

Next, head north up the coastline to Ahu Tongariki, the largest ceremonial site with an impressive row of 15 upright moai. Learn how a tsunami in 1960 sent these statues, some weighing 30 tons (27 metric tons), flying several hundred feet inland. Restoration of this site took five years and was completed in 1992.

Then travel inland to Rano Raraku, where on its volcanic slopes Rapa Nui sculptors had carved moai from volcanic stone before moving about one third of them to various ahu. Many of the island’s 800-plus moai remain in the quarry and close by; as you trek with your guide toward the stone pit, you’ll see poking up from the grassy earth hundreds of moai heads or partially buried torsos.

Enjoy a barbecue lunch (provided) at a nearby camping area, which includes chicken and other meats, fish, salad, rice, fruit and water. A vegetarian option can be arranged upon request. You’ll spend about 2.5 hours in total at Rano Raraku with lunch time.

Along the northern coast, reach your final stop at Anakena and explore the extremely well-preserved seven moai of Ahu Nau Nau, four of them wearing pukao. At this site, archaeologists located one nearly complete coral eye, inlaid with red volcanic scoria stone.

Your sightseeing complete, swim or stroll along Anakena, one of the few white sand beaches on the island, for about 30 minutes before being transported back to your hotel. Or feel free to stay longer, and your guide will arrange a cab ride for you (own expense) when you’re ready to return to your accommodation. Changing rooms with showers are available on site for a small fee.

To fully grasp the mystery of Easter Island (and with a limited amount of time), this tour perfectly fit the bill. Our driver, William, was quite professional, while our tour guide, Moana, was delightful and informative, explaining to us the Rapa Nui culture, as well as the various theories surrounding the mystical stone heads. Lunch was better than expected (not just a box lunch, which would have been just fine), and I particularly enjoyed capping off the day with an excellent beach excursion. A word of advice, though: don't forget your sunscreen (even on cloudy mornings)!
Read More Reviews