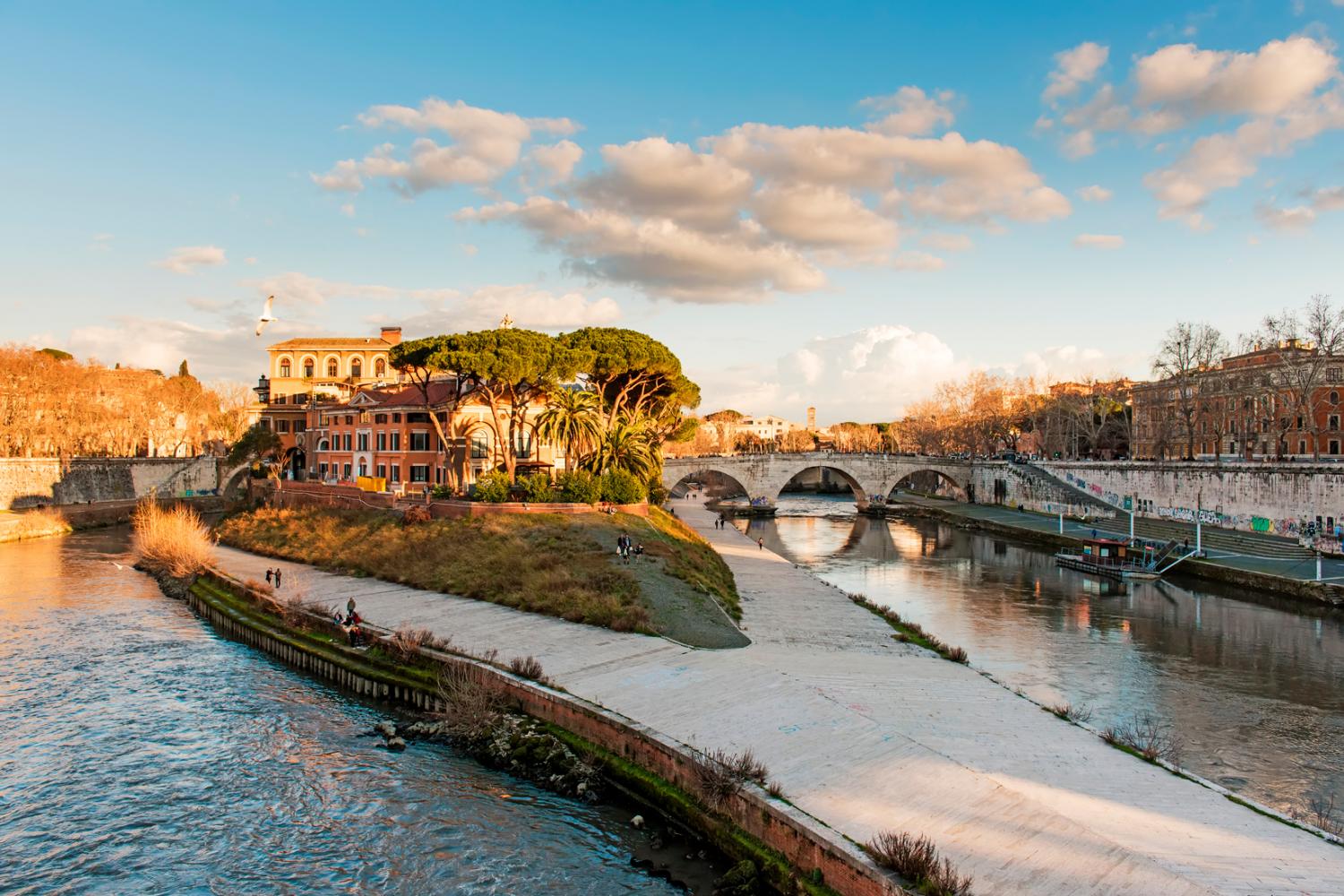 Breathe in the ancient and popular soul of this city with an exclusive guided walking tour of Trastevere!

Come with us to discover all the hidden secrets of this incredible area of Rome: from the little squares to the sumptuous churches, from the monuments to the most famous people in the history of the city, to all the lesser-known places, which you can then admire in absolute freedom.

One of our professional guides will be waiting for you on Ponte Fabricio to begin the magnificent exploration of the only island in the Roman territory, whose name derives precisely from the river that surrounds it like a powerful embrace. We are of course talking about the beautiful Tiber Island!

Crossing Ponte Fabricio, the oldest of the Roman bridges still in use, you will reach the island from the left bank of the Tiber River and you will feel like stepping into a time machine and going back centuries, to when the Greeks and Romans made it the great city and empire it once was.

This time you will have a front-row seat to relive all the most important events that marked its development and history!
Did you know that the Romans worshipped it and considered it sacred? Yes, they did! The island's core is made up of volcanic rock, but hundreds of years of accumulation by floods have helped make it what it is today. The Romans believed it was made up of sheaves of wheat belonging to the Tarquini: rumor had it that the Roman army had thrown the wheat into the river when the Tarquini (an ancient population that lived in the area) were driven out of the city. Because of its shape and location, Tiber Island has always been the 'bridge' par excellence for the city of Rome, connecting the most important trade routes of the ancient city.

At the end of your visit to Tiber Island, one of Rome's most beautiful and authentic neighbourhoods awaits you: Trastevere. The name derives from the Latin term trans Tiberim (beyond the Tiber), which described its detachment from the ancient core of the city.
Trastevere originally remained outside the city's perimeter until the Republican era, but soon became a thriving - albeit poor - district populated by the best artisans: potters, carpenters, millers and furnace workers; leather and ivory workers; musicians and artists; writers and painters, lived among these narrow and romantic alleys, breathing the air of the true popular Rome.

On the way, you will visit the Basilica of San Crisogono, one of the oldest Roman basilicas. Usually unknown to the mass public, you will be able to observe its wonders totally undisturbed with Gray Line I Love Rome! The frescoes and paintings, the remains of the original church and many stories and legends make this building a true masterpiece of the 17th century period.

You will realize you have reached the heart of Rome's most characteristic district when you will get to Piazza di Santa Maria in Trastevere. Here you will admire the Basilica of the same name and with a centuries-old history: it was in fact the first official Christian place of worship in the city. The basilica is a triumph of wonders, beauty and priceless art treasures, such as the mosaics, some of which are already visible from outside the building, such as those from the 13th century on the upper part of the façade, or those in the apse basin, or those by Pietro Cavallini, depicting stories of the Virgin.

Our walk is about to come to an end, but we couldn't leave you without a dive into the historical alleys surrounding Piazza San Cosimato. With the splendid 10th-century church of the same name, we will be able to admire this masterpiece from the outside before arriving in Piazza San Francesco d'Assisi, embellished by the splendid Baroque church that houses the cell (now the Sanctuary) that welcomed St. Francis himself during his Roman days of papal visits. The Church of San Francesco a Ripa is a magnificent place of art, which preserves and collects splendid works of art such as L’Estasi della Beata Ludovica sculpted by Bernini, or the works of art in the chapel, signed by Giorgio de Chirico.

All good things must come to an end and so this incredible walk through the ancient and popular heart of Rome has reached its final stage. Make sure to tune some notes of the most beautiful lyrical verses as you pass the Basilica of Santa Cecilia, patron saint of musicians, as we get back together to the Tiber Island, where we will say goodbye and continue our day.