City tours and fun things to do in Asheville

You wouldn’t think that you’d find the “San Francisco of the East” or the “Paris of the South” just a few miles away from the Blue Ridge Mountains. You probably wouldn’t think that Buncombe County, in western North Carolina, would be home to a city that has so many microbreweries that it won the Beer City USA poll in 2010 and 2011; or that national attention has been paid to such a community because of its environmentalism and promotion of sustainable agriculture. Once arriving in the city of Asheville, however, you’ll be surprised to find that such a place does indeed exist. You will also realize that you don’t need to travel to Austin, TX, to meet people who wear their eccentricities on their sleeve, and that you don’t need to go all the way to New York, Chicago or Portland to see a fine collection of Art Deco buildings, stroll through a booming arts district or view one of the most ostentatious (though breathtaking) monuments of the Gilded Age, the Biltmore Estate. All you need to do is head to Asheville.

There are a lot of fun things to do in Asheville. Some of the most popular landmarks include the Asheville Art Museum and the Grove Arcade, a historic building erected in the late 1920s that has recently been restored to its former beauty, and is now home to restaurants, food markets and stores that specialize in local crafts. However, most Asheville attractions are less about seeing and touring, and more about exploring the city, as well as appreciating its focus on the local and the artisanal. An Asheville tour will allow you the opportunity to see just how unique the city is, not only because of the historic buildings like the Battery Park Hotel or the Grove Park Inn, but because of the idiosyncrasies of the people who now occupy the space.

There are also dozens of great, outdoors destinations not far from Asheville, too, most notably the Great Smoky Mountains, America’s most visited national park. Though there isn’t an Asheville tour that ventures out of the city at this time, the Smokies can be reached by car in just a little more than an hour.

The Gray Line Asheville trolley tour is an ideal way to learn about this quaint and enchanting city. It is perhaps more fitting than an Asheville bus tour because the city was home to the first street cars in the state of North Carolina. While these Asheville trolley tours give you the opportunity to see and hear about the history of the Montford Historic District or Biltmore Village, a inimitable neighborhood filled with locally-sourced restaurants and independent boutiques, they also allow you the time to become more acquainted with the city as a whole and to understand how all of the communities and neighborhoods have their own unique characteristics.

However, if you are more interested in Asheville tours not only of the past, or even the kind of past that Faulkner spoke of in his experimental book Requiem for a Nun, but in the past that lingers on in a more spooky ways, then you may be interested in the Haunted History and Murder Mystery Ghost Tour, an Asheville ghost tour that examines the more sinister and eerie side of the city. Even if you’re from Asheville, chances are that you'll learn something new about the city on this haunted tour, which will examine such phenomena as the pink lady at the Grove Street Inn and the ghost of Church Street, as well as some of the less haunted, but no less shocking, chapters of Asheville's history. These include the killing spree that took place in 1906 and the fact that a group of Nazis once called the city home.

No matter what you hope to learn or find in the city, Gray Line Asheville is the best way to discover and explore the finer points of this beautiful, southern gem.

Create your own itinerary in Asheville aboard our nostalgic hop-on hop-off trolleys, highlighting the history, homes and hot-spots around the city 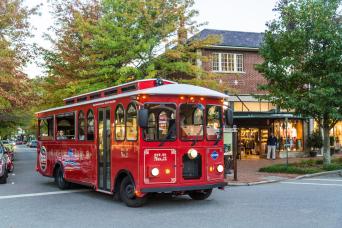