City tours and fun things to do in Berlin, Germany

There are only a handful of cities in the world that are more cosmopolitan and influential than Berlin. It is far more than just the capital and most populous city in Germany; Berlin has also served as the home of German idealism, the center of German nationalism and was the nexus not only of German division, but of a split that defined the world for almost half a century. Berlin has also served as one of Europe’s most prominent hubs with regards to modern art, literature, philosophy and architecture, and remains one of the world capitals for everything from rock and graffiti art to fashion and haute cuisine to this day.

Like other world-class cities, Berlin offers wall-to-wall landmarks, especially when you are in or around Mitte, the city's central area. It is here that you will find one of the most famous Berlin attractions: Museumsinsel (Museum Island). Located in the middle of the city, this small island contains five of the most famous museums in Germany: the Pergamon-Museum, the Bode-Museum, the Neues Museum (New Museum), the Alte Nationalgalerie and Altes Museum (Old Museum). This ensemble is also a UNESCO World Heritage Site. Within less than a block of this island, you will also find the German Historical Museum, the Rotes Rathaus (City Hall), the Neptune Fountain and the Fernsehturm, a television tower that is the tallest structure in Germany. Some more somber monuments include the Memorial to the Murdered Jews of Europe, the Berlin Wall Memorial and the DDR Museum, which reveals what life was like under Soviet-occupied East Germany.

While Berlin sightseeing can keep you occupied for days, if not weeks, it's important to remember that some of the top things to do in Berlin have nothing to do with museums or iconic structures from Nazi propaganda films. Berlin has been a world city for so many years because it attracts artists, writers, designers and creative types who defy labels. While you will find some of the best shopping and high-end restaurants on Kurfürstendamm (often shortened to Ku'Damm), which runs through the western neighborhoods of Tiergarten and Charlottenburg, the more trendy and fun Berlin attractions can be found to the east of Mitte. Two neighborhoods that have become particularly popular as of late are Prenzlauer Berg and Friedrichshain. No matter whether you're looking for punk venues, clubs that stay open until dawn or nothing more than a biergarten in which to sample a few lagers, pilsners and hefeweizens after enjoying a Berlin tour, these two neighborhoods will not disappoint.

There are numerous day trips from Berlin that will allow you to see some unique parts of the German countryside. You can travel to Bad Saarow; which was, prior to the outbreak of World War II, one of the most glamorous spa and resort towns in Germay; stroll around one of the more unique pieces of land in Germany, Pfaueninsel (Peacock Island); or travel to Potsdam, perhaps one of the most elegant of all the UNESCO World Heritage Sites in Germany. Whether by train, bus or boat tour, there are dozens of places to explore just beyond the city limits of Berlin.

Our Berlin Hop-On Hop-Off bus tour allows you the opportunity to see Berlin on your own terms. For example, if you would like to see more of one of the many attractions in Berlin, such as the Reichstag, feel free to hop off the bus when we arrive. When you're ready to continue the tour, just wait for the next bus, and hop right back on. It's that easy.

Gray Line Berlin has two distinct tour routes that go to the most significant historical and cultural attractions in Berlin. Our yellow tour explores the most famous sites in central Berlin, such as Charlottenburg Palace, the Bauhaus Museum and the Victory Column, while our purple tour fans out beyond the realm of Mitte to more reflective sites like the Berlin Wall Memorial and the Jewish Museum.

On top of our yellow and purple Berlin tours, Gray Line Berlin also offers packages that include entry into the Berlin Zoo, the DDR Museum and Madame Tussauds, as well as cruises along the Spree. Whether you've come to shop KaDeWe, to hear some of Germany's best djs at the Love Parade or just to see the sights, Gray Line Berlin will give you the royal treatment as you enjoy the best that this world-class city has to offer.

The Yellow Line hop-on hop-off tour of Berlin takes you to the top landmarks and monuments throughout the city, but lets you build your own itinerary 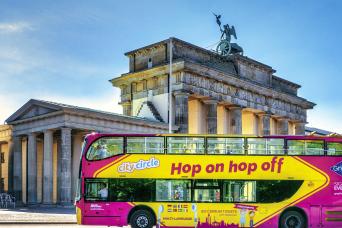 This hop-on hop-off tour of Berlin takes you to the top landmarks and monuments throughout the city over 2 days, but lets you build your own itinerary 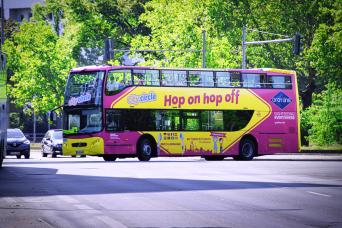