City tours and fun things to do in and around Buenos Aires, Argentina

Experience the art of tango from it's place of origin, Buenos Aires

Buenos Aires is the largest city in Argentina, and one of the most popular destinations in the world. On top of being the birthplace of tango, Buenos Aires also offers some of the best nightlife and cuisine on the continent. It is far more than a party city, however. In fact, it is commonly referred to as the Paris of South America because of its sophistication, cosmopolitanism and brilliant architecture, not to mention its strong ties to Europe. The culture of Buenos Aires is entirely unique, as it is a hybrid of Old and New Worlds. Perhaps this is why the residents of the city refer to themselves as porteños (people of the port).

There are hundreds of landmarks throughout the city, and no Buenos Aires city tour would be complete without seeing the Plaza de Mayo, the Water Company Palace, Recoleta Cemetery and the Obelisk of Buenos Aires, which serves as the icon of the city. However, some of the most important Buenos Aires attractions are not landmarks or specific locations, but the city's many neighborhoods (or barrios). La Boca, the old port district, possesses a distinctly Italian flavor, though its brightly colored houses and street performances are uniquely Argentine. There is also San Telmo, which is one of the oldest parts of the city and draws in visitors from around the globe for its myriad antique fairs and art shows. Some of the more upscale barrios, such as Recoleta and Palermo, are ideal for walking or biking tours. These beautiful streets are home to hundreds of sidewalk cafes and bars, as well as some of the most exquisite architecture in Buenos Aires. Of all the top things to do in Buenos Aires, some of the most popular are to simply take in the colonial architecture of Palermo Viejo or one of the city's many outdoor tango shows while sipping a Malbec at a cafe.

If you plan on staying in Buenos Aires for more than a few days, you should take the opportunity to experience the Argentine countryside, too. There are several day trips from Buenos Aires that will let you witness the nation's strong tradition of ranching, and to learn firsthand why Argentina is known for cooking some of the most delicious beef on the planet. Other Buenos Aires day trips include excursions out to the islands of Tigre and into the nation of Uruguay.

We offer dozens of options that will allow you to explore Buenos Aires. Our Buenos Aires airport transfer can get you from the airport to your hotel in style, while our world-famous guided bus tours and bike tours will allow you to learn about the city as you pass landmarks like Casa Rosada and ride down famous streets like El Caminito. We even offer tours well beyond the city of Buenos Aires that will teach you about the gaucho (cowboy) way of life on an authentic ranch.

However, most Buenos Aires things to do are not concerned with sightseeing or taking tours of the city and the countryside. The culture of the porteños is more about appreciating the sensual pleasures that life has to offer, and we reflect that in the services that we offer. This is why many of the Gray Line Buenos Aires tours are not tours at all, but experiences. We offer tickets to a wide variety of tango shows, as well as several food tours that stop at some of the best restaurants in Buenos Aires. Our gaucho tours allow you to explore the ranch by horse and to learn about the gaucho lifestyle with wine, mate (the national beverage of Argentina) and beef that has been cooked on a parrilla, a traditional South American grill.

No matter what type of experience you hope to have in the Paris of South America, you can be sure that Gray Line Buenos Aires will be there to help you as you plan your trip to this magnificent city.

Enjoy unlimited hop-on hop-off access all around Buenos Aires to explore the unique neighborhoods, architecture, and sights that this city offers! 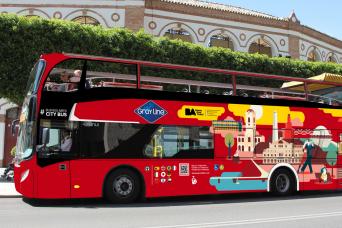 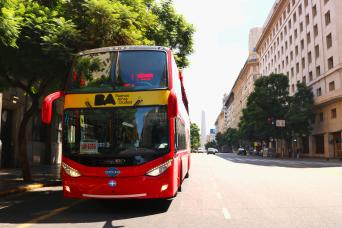