Hop-on and hop-off as you tour Nashville's top sights

Nashville airport transfers and shuttles to the city

Nashville, aka "Music City," sits along the Cumberland River in central Tennessee. The city, the state capital, offers plenty for music lovers to do, such as visit the Country Music Hall of Fame, drive past the homes of country music stars and attend a performance at the Grand Ole Opry. However, music isn't the only thing Nashville has to offer. You can also visit Andrew Jackson's home, "the Hermitage," tour the Tennessee State Capitol building and even take a General Jackson Lunch Cruise down the Cumberland River.

There are a plethora of things to do in Nashville. Nashville is the center of the country music industry and many of the city's attractions revolve around music. There's Music Row, home to several gospel and Christian music companies; the historic Ryman Auditorium, home to the original "Grand Ole Opry," and dozens of blues bars.

Nashville also boasts a number of Civil War era attractions, such as where the Battle of Nashville was fought and Belle Meade, a 19th century plantation house. Food fans will find Nashville full of intriguing and innovative eateries. You can also experience life in the early days of the Cumberland Valley at Fort Nashborough, a living history museum.

Whether this is your first trip to Nashville or you've been here a dozen times, the "Music City" offers something new and exciting every time you visit.

Where should you begin sightseeing in Nashville? The city offers so many interesting attractions; it's difficult to know where to start. One good way is with a Nashville sightseeing tour. A general tour can give you a feel for the layout of the city and all of its attractions. That way you'll know what you want to return to later in your trip.

Gray Line Nashville offers a wide selection of Nashville sightseeing tours. There are music-themed tours, complete with Country Music Hall of Fame tickets and Grand Ole Opry tickets. There are also Ryman Auditorium tours, Nashville Nightlife tours, a Nashville Civil War tour, a Nashville food tour and ABC's Nashville tour, which visits many of the locations used for the hit television show, "Nashville." Gray Line Tours can even provide you with a Nashville airport transfer, both when you arrive and when you depart the city.

One of the most convenient Nashville sightseeing tours is the Gray Line Nashville Hop-On, Hop-Off bus tour. This one-day tour features a dozen stops at major attractions in and around Nashville. You travel in style on a double-decker bus with recorded commentary. There's even WiFi on the bus. You can get off the bus as many times as you like and spend as long as you want to at each attraction.

Gray Line Nashville is a travel industry veteran. Our family-oriented company has been putting together quality sightseeing tours for more than 35 years. We are truly your local expert.

Hop aboard a classic Gray Line trolley to see Nashville lit up at night and it's iconic landmarks like the Tennessee State Capitol and Parthenon! 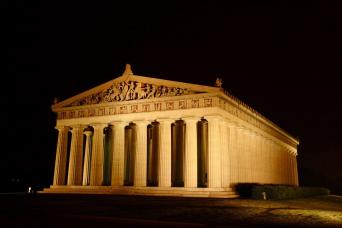 This tour of Nashville is where music and history are combined with the Country Music Hall of Fame, the Parthenon, Music Row, and the Ryman Auditorium 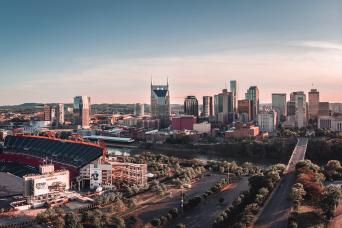 This tour will take you from Nashville to Memphis to see Graceland, the iconic home of Elvis. Also see Beale Street, and the famous Sun Studios 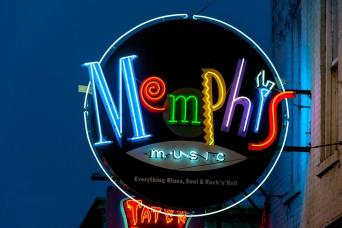