There are few sights in North America that are more majestic than Niagara Falls, and people from the USA, Canada and all over the world have been coming to witness the natural wonder of the three waterfalls (the Horseshoe Falls, the American Falls and the Bridal Veil Falls) that comprise the landmark for centuries. These falls have been such an iconic part of the New York landscape that as early as 1885 the area around the falls became the first state park in the United States. Even as early as the 1860s Niagara Falls was regarded as the nation’s most popular tourist destination. Once you’ve experienced the falls for yourself, you’ll understand why the area remains one of the most-visited sites in North America to this day.

Taken together, 3,160 tons of water flows over the three waterfalls every second, thereby making them, when combined, one of the world's largest waterfalls. Every second, there are 75,750 gallons of water flowing over the American and Bridal Veil Falls, while there are 681,750 gallons coming over the Horseshoe Falls. Suffice to say, Horseshoe Falls is the workhorse of this team.

On top of seeing the falls from either New York or Ontario, there are hundreds of Niagara Falls attractions that will give you a variety of perspectives of this breathtaking site. Some of them can be accessed for free, such as Goat Island, which sits between the American and Canadian Falls; Terrapin Point, which overlooks the Canadian Falls; and the Three Sisters Islands, where you can see the rapids of the Upper Niagara River before the river plummets over 160 feet, and then continues on toward Lake Ontario. Some of the most popular Niagara Falls sightseeing tours that are not free include the Maid of the Mist tour, which comes within a few hundred feet of the falls by boat, and the Cave of the Winds tour, which comes within just a few feet of Bridal Veil Falls by land. When you're this close to the falls, it feels like you're in the midst of the hurricane.

There are dozens of tours to Niagara Falls from cities like Toronto, Buffalo and even New York City, but there are also many days tours away from the falls that explore such notable attractions as the Niagara Falls Power Plant, the Seneca Niagara Casino and downtown Niagara Falls, which is home to dozens of restaurants, cafes and bars. You may find that some of the most fun things to do in Niagara Falls have nothing to do with the falls themselves.

Gray Line Niagara Falls tours the most magnificent sights in and around the falls. Our Maid in America tour explores the falls from the American side, while our Rainbow tour takes a look at the falls from Ontario. Regardless of which Niagara Falls tour you decide to take, the Canadian or the American, we offer a ride on the legendary Maid of the Mist—so called because the boat travels so close to the falls that you can feel the mist on your face. On the Rainbow tour, we also offer a trip to the Skylon Tower, which gives you a unique perspective of the falls from 775 feet in the air. The tower is particularly popular at night when the falls are illuminated with vibrant and multicolored lights that seem to pulse with the mist. The Maid in America tour includes an unforgettable Cave of the Winds tour.

No matter which tour you choose, both include Niagara Falls bus tours and boat tours that will introduce you to the most amazing sights that Niagara Falls has to offer, as well as access to a knowledgeable guide who will regale you with a history of the falls and the surrounding community, as well as some of the daredevils who challenged fate and survived to tell the tale.

Experience the magnificent sights of Niagara Falls, New York including an awe-inspiring ride aboard the Maid of the Mist and a Cave of the Winds tour 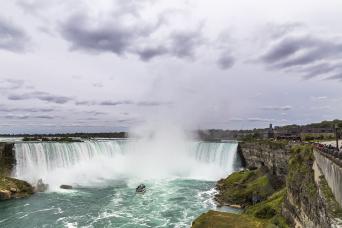 This is a great tour for your Instagram feed! Let us take you to the best viewpoints around Niagara Falls 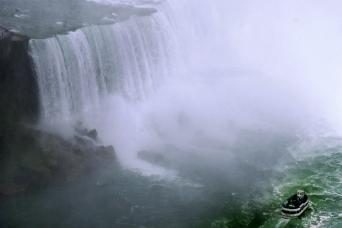 From the fal colors to the natural ice sculptures, winter is a great time time to visit Niagara Falls! 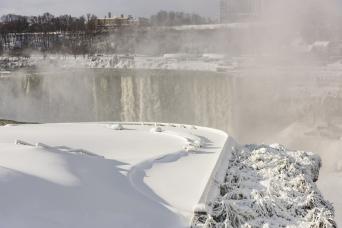