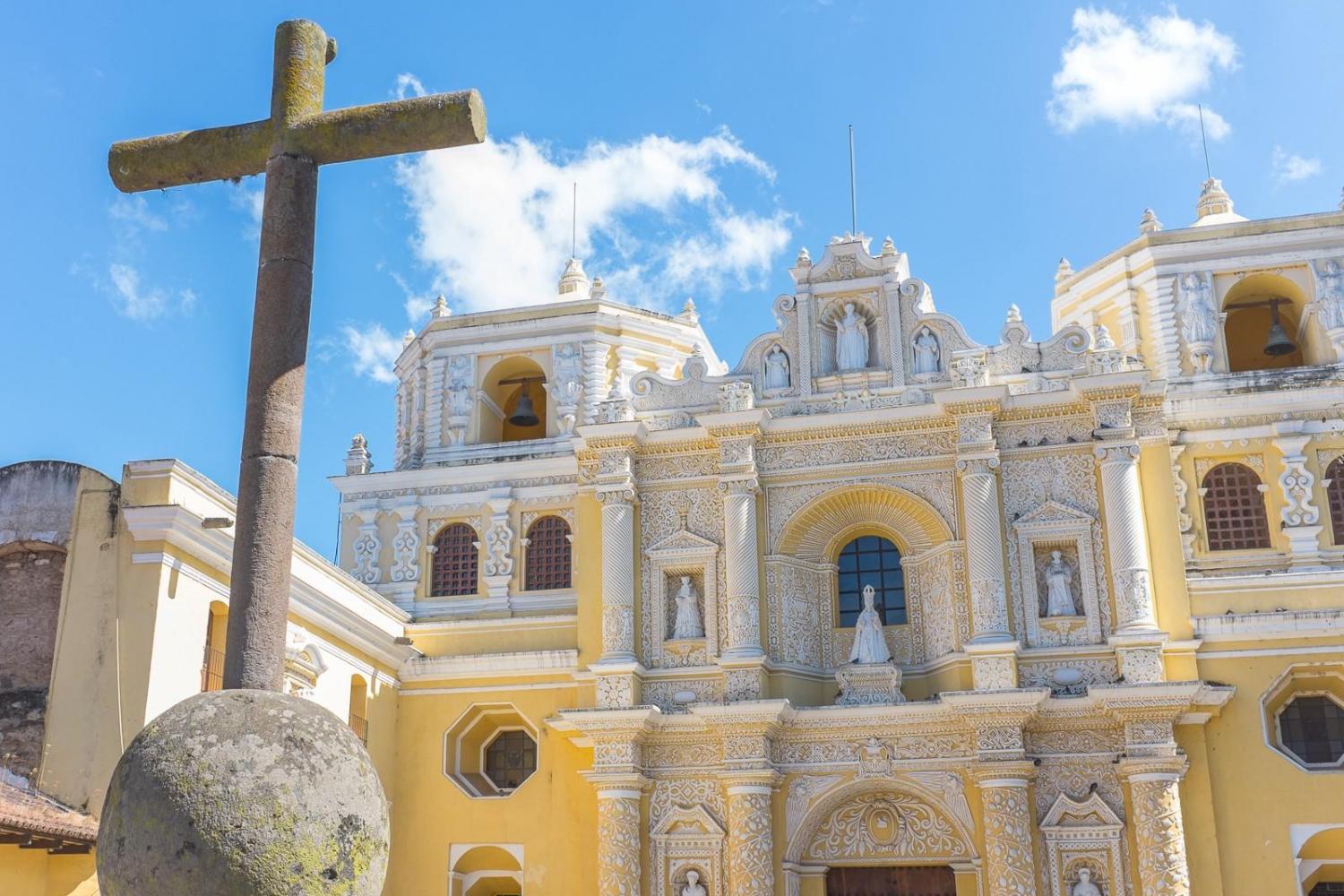 We will enjoy of two magical cities with the charm of the Colonial Antigua and the Modern Guatemala City, learn about the history of both cities.
You will be picked up at your hotel (selected hotels) in Guatemala City and transfer to our meeting point in Antigua Guatemala to meet our local guide to begin your soft walking of approximately 3 hours below a brief summary of what to expect on your way.
La Merced Church of Guatemalan Ultrabaroque style, this temple has two bell towers. On the facade of the church, in its upper part is a sculpture of San Pedro Nolasco, founder of the Mercedarian Order.
Santa Catalina Arch, built to connect the nuns between cloisters to avoid being seen due to the votes that the religious who belonged to that Order took, After the earthquakes of 1773, the arch became important due to the arrangements that were made. These arrangements included the construction of a turret and the inclusion of a Lamy Amp Lacroix watch of French origin.
Central Park surrounded by the traditional grid pattern used frequently in urban planning in the Spanish colonies. The park is surrounded by the Palace of the General Captains, the Town Hall, the Cathedral of San Jose and the Trade Portal.
Here in the park, we will also find the Las Sirenas fountain. This fountain has a traditional oral where the Count of La Gomera ordered to build the fountain in memory of his daughters, who in giving birth did not want to breastfeed their children for what the count ordered To tie his daughters to a trunk in the center of a waterhole, where they died of thirst and hunger.
Continue our way we will visit the La Unión tank, which is one of the most representative laundries in this city, only the big houses had a place where they could be washed. For this reason, most of the inhabitants - housewives - went to public laundries. This was inaugurated on February 3, 1853.
Jade Factory and Museum The jade is cut and polished in the factory by local Guatemalan workers who follow the carving traditions of their ancestors, Ancient civilizations appreciated the jadeite jade stones as ornaments, tools, and burial artifacts.
El Carmen Ruins, The facade of the church was built with stucco-covered bricks, it had two levels with 24 columns in total, distributed in two towers of 6 columns each, this detail makes the temple still unique today. To one side of these ruins is the El Carmen Craft Market.where you can find a lot of Guatemalan souvenirs.

Transfer to Guatemala where we will have Time for lunch (Not Included, it is optional for an extra price) we will make a stop to taste the Guatemalan gastronomy and how to make tortillas.

By the afternoon we will start with our sightseeing tour through the city
First we will visit Las Americas avenue that is a road in its central garden has several Plazas and monuments in honor of the countries of the American continent.

Continue to Berlin Plaza panoramic view of part of the city and the landscape of the Pacaya volcano.

La Reforma It was built inspired by the avenues of France for this reason various statues carved in stone, bronze and marble were brought from Italy.

Yurrita Church It is a private chapel of mixed Baroque style, with Romanesque and Byzantine elements. The church was built as a votive offering by Felipe Yurrita, a native of Arevalo, Castilla, Spain, to the Virgin of Our Lady of Sorrows, patron of that town, for favors received, in particular to have saved her life during the eruption of the volcano Santa Maria.

The Civic Center of the City, we will see a set of buildings constructed between the 50’s and 60’s: The Supreme Court of Justice, the Ministry of Public Finance, City Hall, the Social Security, the Bank of Guatemala, the National Mortgage Bank, and the Guatemalan Tourism Commission.

The Paseo de la Sexta Avenida, was born due to the transfer of the city after the earthquakes of Santa Marta in 1773.The Sixth Avenue was one of the most important streets in the city, where the best fashion stores were found of the city, the most prestigious commercials as well as the first movie theaters.

The Lux Theater was one of the most important and emblematic stages in Guatemala between the years 1935 and 1960.The Theater was converted into a cinema in the 1980s due to the decline in interest in the theater. More recently, it was transformed into the new headquarters of the Cultural Center of Spain after an architectural remodel.

The site of Hotel Pan American was originally called the Pension Amado, which was built in 1914 and demolished by earthquakes in 1917 and 1918.Was renamed Hotel Pan American to honor the Pan Am Airlines crews who often stayed at the hotel. By the early 1980s, Hotel Pan American was the downtown meeting place. It was where presidents had lunch and diplomats, government officials and foreign visitors gathered to discuss matters of national interest.

The Rubio Passage, also called "El Portalito", is one of the best known places in Zone 1, Part of its structure is inspired by the commercial passages of Italy, from the 17th century.


Arrive at the Major Plaza of the Constitution. This Plaza is the heart of the Historic Center of the city. It is surrounded by important monuments such as the National, the Metropolitan Cathedral, the Portal of Commerce and Centenarian Park.

Finally, we will visit the Central Market, which is located behind the Metropolitan Cathedral, in the basement of the Tabernacle Plaza. It is divided by different sectors of products, where you will find from spices to beautiful memories of jade made in Guatemala.

At the end of the tour you’ll be transferred back Guatemala City by our driver.

Our guide Rojo was wonderful. We learned so much about the history and culture of Guatemala
Javier