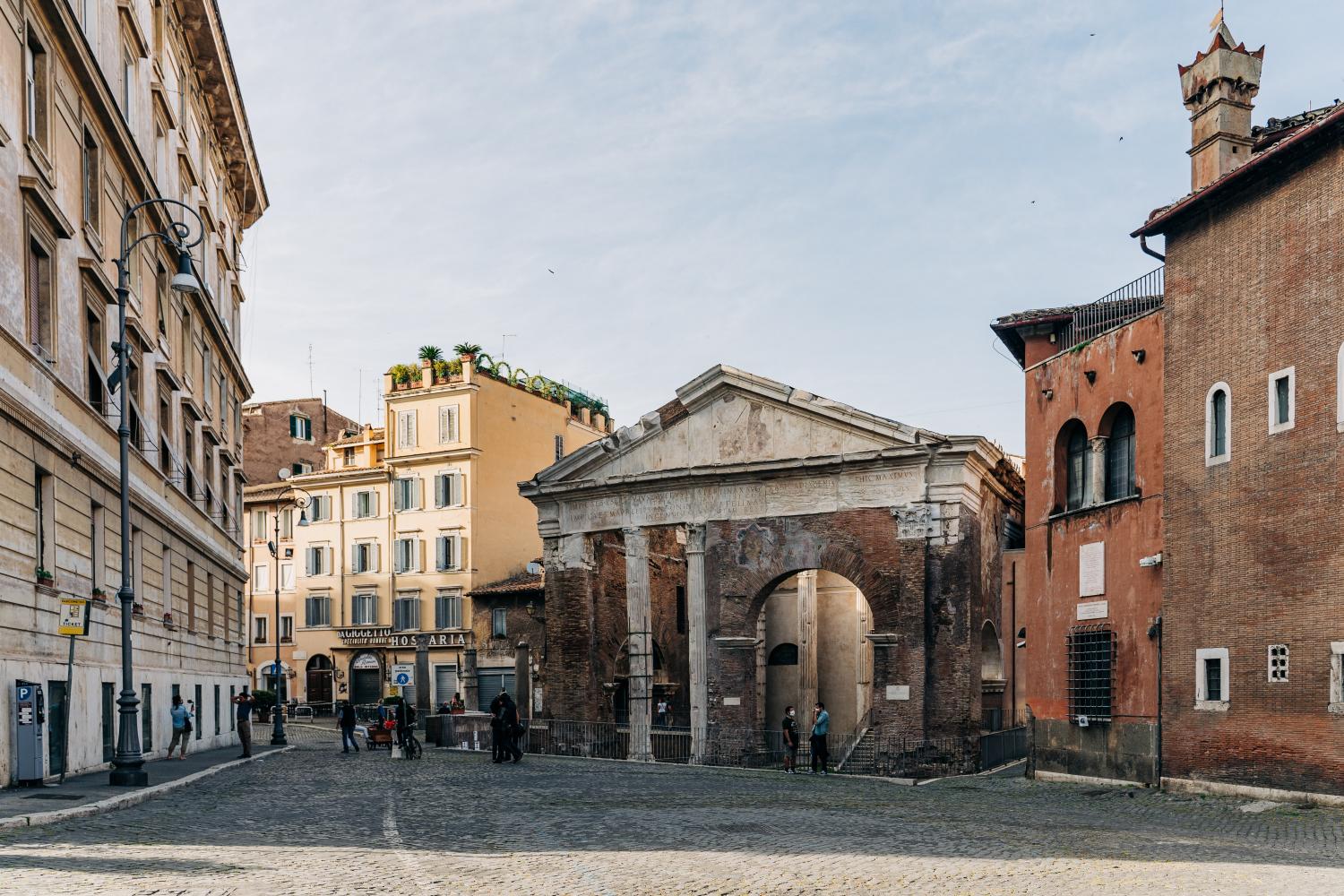 Join us on this romantic itinerary in the heart of the Eternal City, at sunset!

At sunset, Rome turns into one of the most romantic places ever: join us on this tour and enjoy the Eternal City coloured by the magical hues of the setting sun!

In a group of maximum 20 people and led by an expert guide, we will take you on a truly pleasant stroll along the stunning city center of Rome.

Reach the meeting point on your own to meet us and start this walking tour with your guide.

You will walk along the streets of the characteristic area of the Jewish Ghetto, one of Rome’s most beautiful neighbourhoods, full with history and with a real Roman atmoshpere. Rome’s Ghetto is the second most ancient one in Italy, after the one in Venice, and it truly is the heart and soul of the authentic Roman cuisine!

As you know, one of Rome’s most famous symbols are its beautiful fountains, and one of the prettiest is the Turtle Fountain (Fontana delle Tartarughe), located in Piazza Mattei!

Get ready to walk into Piazza Della Rotonda and enjoy a breathtaking view of the Pantheon, the former temple of Marcus Agrippa, later converted into a church: it is the only ancient Roman temple remained untouched through the centuries! It is simply stunning at night when it is not crowded and peace and quiet surround it.

Next Stop? Close your eyes and throw a coin over your right shoulder straight into the Trevi Fountain: rumor has it that if you do, your will come back to Rome someday, for sure!

Our tour will continue towards Piazza di Spagna, one of the city’s most popular piazze (squares), known to be the perfect setting just at the bottom of the iconic Spanish Steps. Walk up this famous stairway and take the most out the lovely view you will enjoy from the top!

After an intense and gratifying walk, we thought of a great reward for you all: come with us and relax enjoying a creamy and tasty Gelato. It’s on us!
Thanks to our 1 hour 30 minute itinerary, and the company of our dedicated guide, you will be able to discover the secrets of the following places:

1. Teatro Marcello:
It is a small theatre commissioned by Emperor Augustus which, due to its similarity to the majestic Colosseum, but because of its considerably smaller size and semicircular structure, is called the "Small Colosseum".
2. Portico d’Ottavia:
Only the monumental entrances are preserved. This monument has contributed to creating one of the most evocative views of the ghetto and of Rome itself.
The thousand-year history of this monument begins with the dedication of a previous portico by Augustus to his sister Octavia, in order to bind it, together with the Theatre of Marcellus, to the memory of his gens (a group of families who identified themselves with a common ancestor and practised common cults). In the Middle Ages, the area was used as a fish market and retained this function until 1880. The strong relationship with the ghetto brought to one of the typical dishes of traditional Jewish-Roman cuisine: fish broth.
3. Synagogue (exteriors):
This is the religious heart of Rome's Jewish community. It was inaugurated in 1904, following the transformation of the entire district. After the unification of Italy, the ghetto was abolished and underwent a complete reconstruction. The original place of worship, the building known as the 'cinque scole', was replaced by the present 'Tempio Maggiore'. The monumental building is inspired by the Assyrian-Babylonian style with Egyptian and Moorish elements, recalling the history and wanderings of the Jewish people.
The synagogue is also home to the beautiful Museum of the Jewish Community, where precious objects related to the Jewish liturgy are displayed, together with textiles and silverware used to decorate the ancient synagogues.
4. Via del Portico d' Ottavia:
Today it is considered the main street of the district, a reference point and meeting place for the Jewish community of Rome, which counts about 16,000 people. Although only a small part of the community lives within the former ghetto, the area has a strong appeal to many. This is where the most famous restaurants and ghetto shops open, where you can enjoy traditional Jewish-Roman dishes and sweets.
5. Piazza Mattei:
You can admire a small glimpse of the Renaissance period in this unique square, dominated by the exquisite Turtle Fountain, made famous by Bernini's contribution.
6. Turtle Fountain:
This jewel was built towards the end of the 16th century, due to a challenge. Duke Mattei ordered the creation of this marvellous fountain in a single day, having it built in front of the windows of his beloved's father as a demonstration of his own importance. The turtles were designed and placed by Bernini in 1658.
7. Palazzo Manili:
Even today it is still possible to come across buildings that preserve the identity of the past, such as the house of Lorenzo Manili. This building was restored in the middle of the Renaissance period, in 1468 to be exact, by a wealthy citizen who wanted to celebrate as the ancient Romans and applied a long commemorative inscription in Latin, which is still visible, decorating the exteriors with archaeological finds.
8. Pantheon:
The most impressive historical and architectural sites in the centre of Rome. Dated around the early second century AD, it is one of the best preserved building of antiquity in the world, and testifies the superiority of Roman building techniques. Its dome, with its distinctive central hole, the “oculus”, is the biggest ever built in masonry.
9. Trevi Fountain:
The most famous of the Roman fountains: a jewel of water and stone. The terminal part of the Vergine aqueduct, the only one of the ancient aqueducts continuously in use to this day, the Trevi Fountain it is the best known of the Roman fountains. The Trevi Fountain was the splendid setting for the most famous scene of the film La Dolce Vita by director Federico Fellini; a provocative Anita Ekberg wrapped in a long black evening dress calls Marcello Mastroianni: “Marcello, come here!”, while sinuously plunges into the sparkling waters of the fountain.
10. Piazza di Spagna:
Piazza di Spagna is one of the most famous and visited squares in Rome. In the center stands the Fontana della Barcaccia, designed and sculpted in Baroque style by Pietro and Gian Lorenzo Bernini. Piazza di Spagna, with its characteristic butterfly shape like two triangles that cross at the top, as well as being a symbol of the majestic Roman Baroque, is today one of the most exclusive meeting places in Rome, with its palaces, sumptuous hotels , famous restaurants, shops and Atelier of great Griffes.