City tours and fun things to do in Sydney

Great Barrier Reef tours and fun things to do in Cairns

City tours and fun things to do in Brisbane

Hobart Tasmania city tours and fun things to do in Australia

Pinnacles tours and fun things to do in Perth

Uluru tours and fun things to do in Alice Springs

City tours and fun things to do in Adelaide

City tours and fun things to do in Darwin

Often called the land down under, Australia is one of the most unique places on the planet. On top of offering world-class nightlife, cuisine and entertainment in cities such as Sydney, Melbourne and Perth, some of the most notable Australia attractions include Uluru (formerly known as Ayers Rock), the world’s largest monolith; the Great Barrier Reef; Kakadu National Park, which is just under 20,000 square kilometers, or roughly the size of Switzerland; and Kangaroo Island. As much as you may want to take in all of these sights in just one trip via several Australia bus tours, it’s important to remember that Australia is not just the world’s largest island—it is also the world’s smallest continent. Some of the top things to do in Australia just may not be in the cards if you’re only coming for a week or two, and it is important to take into account that travel in Australia may take some time. It is a nation of 2.97 million square miles, after all. In fact, a flight from Cairns, in the northeast of the country, to Perth, in the southwest, takes approximately six hours—about the same time it takes to fly from New York City to Los Angeles. It is unlikely that you are going to get the opportunity to see all of the attractions in Australia; you are going to have to pick and choose which states, cities and parks you would like to explore.

No matter where you decide to go, however, we have you covered. Australia sightseeing is often times a mix of the urban and the natural, and no Australia tour would be complete without getting at least a glimpse of Australia’s unique wildlife and majestic landscapes. Australia travel is all about experience, and it is important to remember that there is no one city or location that embodies Australia. You should try to see it all!

Adelaide is the capital of South Australia, and the fifth-largest city in the country. Adelaide is renowned for its zoo, its botanic gardens and Tandanya, the National Aboriginal Cultural Institute, which is dedicated to the preservation and celebration of Aboriginal history, art and culture. We offer tours that will not only take you through the city of Adelaide, but also into the Barossa Valley wineries, Coorong National Park and Kangaroo Island, home to majestic landscapes, unique wildlife and some of the best accommodations, food and wine that Australia has to offer.

As one of the most remote towns in the Northern Territory, Alice Springs may not be the most bustling of places in Australia. However, this desert town is a significant destination in Central Australia, as well as an absolute must for anyone hoping to either experience the outback or learn about Aborigine culture. On top of being the artistic capital of Central Australia, Alice Springs is also the gateway to dozens of nature reserves, nature parks and national parks, the most famous of which is Uluru-Kata Tjuta National Park, home of what was formerly known as Ayers Rock.

As Australia’s third-largest city, Brisbane offers a wide variety of restaurants and cultural attractions, as well as some of Australia’s best nightlife. While Brisbane possesses a cosmopolitan feel, it is also well known for its easy-going atmosphere and ideal climate. Perhaps most indicative of the Brisbane’s laidback attitude is the massive man-made swimming beach within the center of the city. Day trips from Brisbane include tours to either the Gold Coast to the south or the Sunshine Coast to the north.

The city of Cairns is home to a myriad of resorts, restaurants and places to enjoy a night on the town, largely due to its tropical climate and picturesque beaches. Cairns is often considered the gateway to the Great Barrier Reef, the Atherton Tablelands, as well as the tropics of north Queensland. Of particular importance is the Great Barrier Reef, the world’s largest coral reef system. We offer tours that will allow you to visit the reef via glass bottom boat or with nothing more than some snorkeling equipment and the desire to explore one of the world’s greatest treasures.

Darwin is the tropical capital of the Northern Territories. Throughout the year, the city hosts dozens of festivals that showcase the city’s diversity, the Top End lifestyle and even the Australian love for beer. We offer tours not only of the city of Darwin, but also of some of the nearby National Parks. One of the most popular is Kakadu, which is home to unique ecosystems filled with monsoon forests, crocodiles and dozens of wetlands bird species, such as the brolga.

The Gold Coast is known for its surfing beaches, subtropical climate, nightlife and proximity to pristine rainforests. We offer a tour of the Gold Coast by both boat and coach. The former grants you a view of some of the most luxurious homes on the Nerang River, while the latter takes you through the heart of the city and eventually to Springbrook National Park World, one of Australia’s most popular destinations.

As the second largest city in Australia, Melbourne is a necessary stop for a wide variety of reasons. Melbourne is one of the most cosmopolitan cities in Australia, and home to a strong tradition of artistic and culinary experimentation. The city is also within close proximity to several attractions that are important to both the history and culture of Australia. We offer daytrips to the Yarra Valley, one of Australia’s most famous wine regions; along the southern coast of the nation to see penguins and other wildlife on our Great Ocean Road tour; and even to Sovereign Hill, a community that recreates the magic and excitement of the gold rush of the 1850s.

Perth is the most populous city in Western Australia, and the fourth largest city in Australia. It was recently ranked as one of the world’s most livable cities, not only because of its job market, infrastructure and numerous parks, but because of its nightlife and culture, too. We offer several tours that will allow you to explore this majestic area via river cruise, guided coach or our Hop-On Hop-Off tour of the city. The latter gives you the liberty to hop on and off at any of Perth’s most important landmarks, so long as they are on our route. There are also several day tours out of Perth, too, which travel to such destinations as Rottnest Island, Wave Rock and the Valley of the Giants, a place where you can take a treetop stroll through a forest of enormous Karri trees.

Sydney is the largest city in all of Australia, and home to the most iconic architectural achievement on the continent, the Sydney Opera House. We offer a variety of sightseeing tours of the city and the harbor, not to mention our Hop-On Hop-Off tours, which give you the ability to determine which landmarks and neighborhoods are of greatest interest to you. On top of being a world city that rivals San Francisco, Montreal or Johannesburg, Sydney is also within a few hours of some of Australia’s most breathtaking landscapes and natural wonders. There is no shortage of tours to take from Sydney, no matter if you want to swim with dolphins off the coast of Port Stephens, tour the wineries of Hunter Valley or immerse yourself in the idyllic landscape of the Blue Mountains.

Tasmania is far more than just a pristine island and home to the Tasmanian devil. True, it is not lacking in natural beauty or unique flora and fauna, but it is also home to the city of Hobart, which recently added the Museum of Old and New Art (MONA) to its long list of attractions—which already included Mt. Wellington; Salamanca Place, a precinct that has seen its rows of sandstone warehouses converted into pubs, restaurants, cafes and boutiques; and the Cascade Brewery, the oldest continually operating brewery in the nation. Of the many day trips out of Hobart, the most popular include stops at Russell Falls and Cradle Mountain, as well as an eco-cruise that explores the majesty of Bruny Island, which supports several rare and endangered species of bird.

Gray Line Australia has been serving Australia since 1931. We have been and remain 100% Australia family owned, and we believe that it is our duty to make visitors to our amazing land feel both at home and awed by the landscape that has been a source of inspiration to all Australians since our nation was founded. Our Australia tours will take you through not only the biggest cities in Australia, but also the areas that exemplify the outback. No matter what city or destination you would like to see, we have a tour for you!

Witness the mesmerizing march of penguins at sunset on Summerland Beach. Get up close to indigenous animals such as kangaroos, koalas, and wallabies 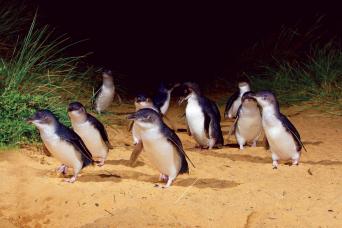 Travel the Great Ocean Road and be treated to stunning ocean views, the 12 Apostles Rock Formation, the Surf Coast, and more. Wi-Fi onboard included 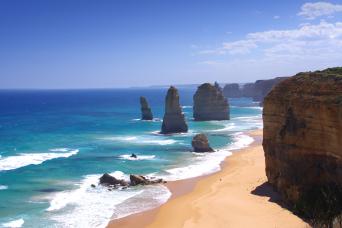