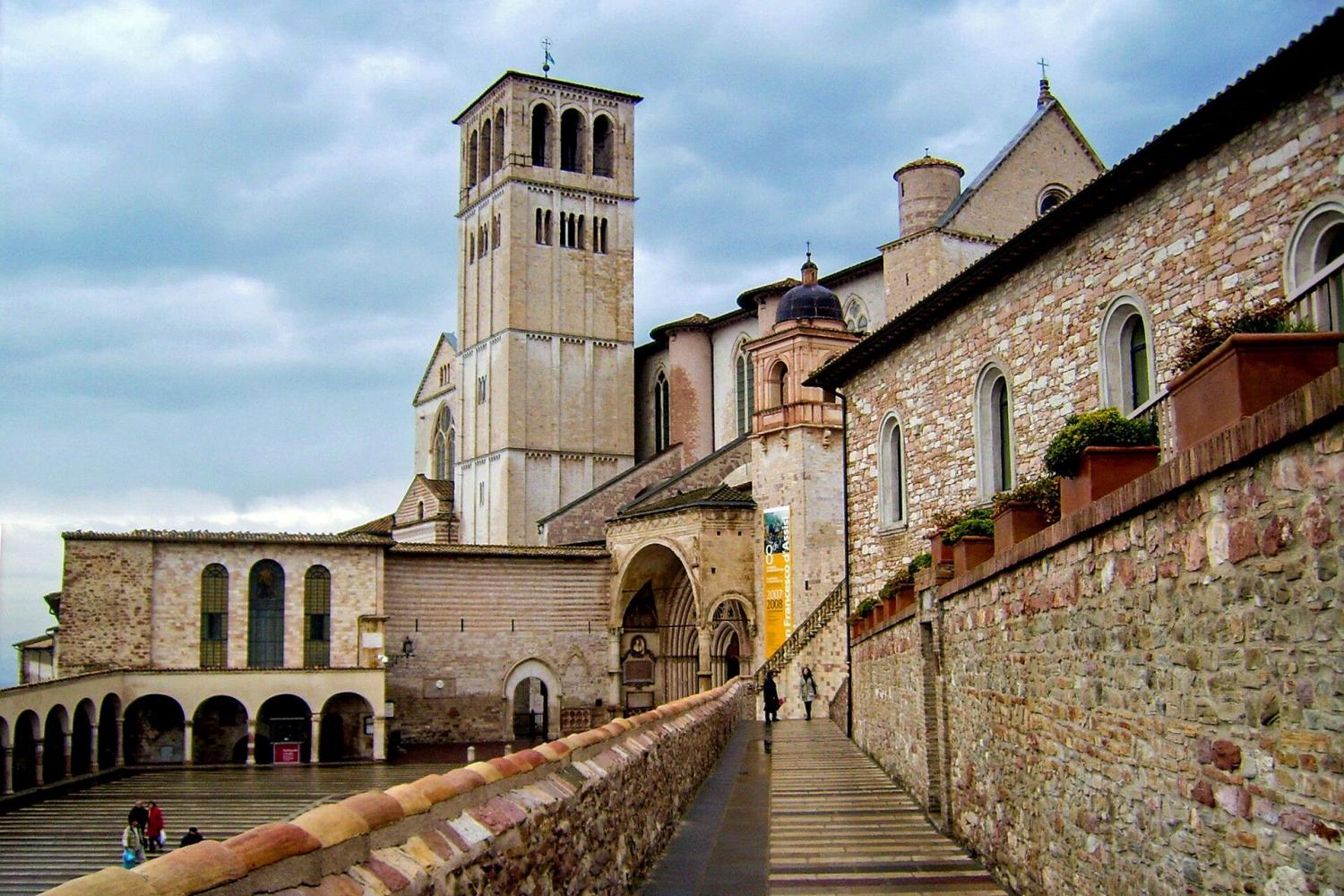 Take this day trip from Rome to the UNESCO site of Assisi. Have lunch, explore the town, and visit the St. Francis Basilica and St. Chiara Basilica

Join us on this classic journey, departing from Rome to explore the beauty of the Umbria region and its many treasures.

Assisi is a beautiful medieval town that was founded by the ancient Roman Empire. After the fall of the Roman Empire it was dominated by the Goths and later, the Logobards. After the year 1000, it saw the extraordinary spread of the monastic movement and particularly the Benedestines.

Around 1180 Saint Francis was born, the most famous of the sons of Assisi. The son of a rich merchant, he grew as a young noble of Assisi but dissatisfied with his life, he turned to prayer and service to the poor. In 1206, he publicly renounced his father's wealth. Pope Innocent III approved his way of life, gave him and his disciples permission to preach on moral topics, and had Francis ordained a deacon. With the collaboration of Saint Clare of Assisi, Francis founded a branch of his order for women, called the Poor Clares. St Francis is one of the most important and beloved Saints of Catholicism.

The church of St. Francis of Assisi stands today in the place where the Saint had asked to be buried. The building of the basilica began in 1228 and was completed after just two years.

The building is consists of two churches, one above the other with each in a completely different style: the upper level is Gothic and the lower is Austere.
Inside you'll admire frescoes by Giotto and see the shrines of St Francis, discovered in 1818, through excavations of the space beneath the altar.

The Basilica of St. Clare of Assisi, constructed in pink stone native to the region, houses many precious frescoes. It is dedicated to Santa Chiara, daughter of a noble family.

During her years of education, the Saint followed the crusaders to the Promised Land. Then during the night of Palm Sunday on March 18th 1212, she made the major life decision to secretly join St. Francesco at the "Porziuncola". As a ritual of initiation, the Saint was covered with a Franciscan frock and her hair was cut as a sign of penitence. This marked the beginning of her new life, retired from the world to a place of extreme poverty and simplicity.

Within the Basilica, there is a chapel on the right that is dedicated to her and an amazing Crucifix in the center of the church which, according to tradition, invited St. Francesco to the church of St. Damiano in order to "reset up the Church".

St. Mary of the Angels in Assisi
Santa Maria degli Angeli is a small village close to Assisi that takes its name from the sixteenth century Basilica which dominates the flat base of Assisi. After the year 1,000, this area took the name of Porziuncola. This place is considered the home of the Franciscan order. In 1216, St. Francis saw a vision in which Jesus stated that anyone who had visited the church, duly confessed and communicated, would receive forgiveness for their sins. Pope Honorius III approved this indulgence and officially declared the 1st and 2nd of August each year to be Days of Forgiveness. To this very day, this yearly event continues draw a large number of religious tourists from around the world.

We were very happy with this excursion. Weather was lovely and added to the spectacular scenery. Lunch also was most enjoyable. I would suggest that when advertising this event mention is made of the steep inclines and stairs as that became an issue when reaching the restaurantOur guide in Assisi was most informative and very well versed in the history and architecture
a Gray Line customer

Seats on the van were uncomfortable.
Read More Reviews